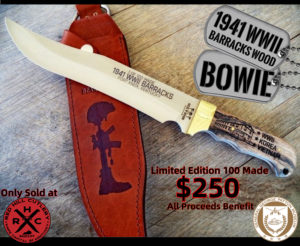 By GINA CLEAR THE NEWS-ENTERPRISE

Red Hill Cutlery in partnership with the Patton Museum Foundation is unveiling a uniquely local collector’s item beginning next week.

Made from wood flooring reclaimed from the World War II barracks on display at the Gen. George Patton Museum in Fort Knox, a special edition Bowie knife will begin sales Tuesday at the knife store in Radcliff.

Store co-owner Josh Basham said, adding all so far have been pocketknives. “This is the first time we’ve ever made a factory production run fixed blade Bowie with a leather sheath.”

With sales of the knife benefitting the Patton Museum Foundation, the 14.5 inch knife is sold with a leather sheath featuring the combat field memorial and a certificate of authentication.

“It’s pretty special because it actually has a bigger chunk of the wood than the pocketknives would have,” Basham said.

The handle is about 4.25 inches and features finger grooves, has a picture of the barracks on the side, and three stars with World War II, Korea and Vietnam next to each representing the era of soldiers who lived in the barracks.

Located outside of the museum building, the World War II Barracks exhibit includes a restored and authentic barracks building along with period-accurate details of the living quarters for trainees.

The project to secure and transport the barracks to its current location began in 2011 and the exhibit was opened to the public in May of this year after a two-year restoration effort.

Because removing and restoring the original wood of the barracks was going to be troublesome, Basham said the committee opted to remove the worn wood and installed new flooring “reminiscent” of the original.

“Through the years, we’ve made over a 1,000 different variations of the barracks knives made from the reclaimed floorboards from when they moved the barracks and reopened them,” Basham said.

What makes these knives, especially the Bowie knife because it uses a larger cut from the floor, significant is the age of the wood that can be authenticated “1941 vintage,” Weaver said.

The only original wood that remains in the barracks exhibit is on the stairs leading to the second floor. Weaver said the steps, which were completely flat across when installed, have obvious signs of wear from the military personnel that tread on them.

“More significant than that is the footprints that are left on that wood,” he said. “You can’t see it as much on the wood flooring, but you can see it on the steps at the barracks that go to the second floor.”

Weaver said because the original floors were installed in 1941, the wear and tear on these steps are symbolic of the footprints all the soldiers, airmen, seamen and Marines who would have resided in the 1,000 barracks that once stood at Fort Knox.

“If you just think about that for a minute, it’s really kind of eerie,” he said.

Because the handle is made from the wood these soldiers walked on at Fort Knox, Weaver said the knife is a tribute to them.

Exclusively sold in the store at Red Hill Cutlery, the collector’s edition Bowie knife sells for $250.

Weaver also has constructed a stand out of the floorboards sold separately for $35.

Basham said the store has donated the cost of the knife so all proceeds go to benefit the foundation and Weaver donated his time and talent constructing the stands.

“The way we do it, we sell the knives to the foundation at our cost,” Basham said. ”Technically, we’re donating the cost of the knife and our time for our employees because it takes a lot of time.”

Weaver commended Basham and his family’s business for its continual support of the foundation.

**Due to ALL proceeds benefitting the Patton Museum Foundation, these are can only be purchased in our showroom in Radcliff, KY or via phone. Shipping charges will apply.

2 thoughts on “Bowie Made from WWII Barracks Wood”