Red Hill, Kentucky might have been absorbed into what’s now known as Radcliff in the early 1950s but when Red Hill Cutlery was founded in 2004 we couldn’t have come up with a better name. Our founder, Lonnie Basham wanted to preserve the “Red Hill” name that he grew up calling the area. Even his father that started Basham Lumber Company Inc. played in a band at his Bluegrass Barn Dance under the name “Red Hill Ramblers.” 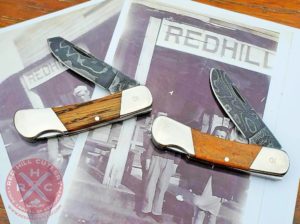 Since then the name Red Hill has taken on another form, and is familiar to knife collectors far and wide as Kentucky’s Largest Knife Showplace and Museum, Red Hill Cutlery. Our family has been in the knife business since the late 1990’s and since then we have wanted to create a Red Hill tanged brand of cutlery. We couldn’t be happier to announce our FIRST Red Hill branded pocket knife, The Rambler Damascus Lockback. Named after the band our founder’s father performed in, this 2020 American made Red Hill Rambler debuts our new Red Hill Radcliff, KY tang stamp. This Never Before Made exclusive pattern will be released in four collectible handles Birdseye Maple, Kentucky Bourbon Barrel Wood, Genuine Stag, and Laminated Abalone Shell, with only twenty-five made of each. Each of these 3” closed lockbacks feature Nickel Silver bolsters and (for the First Time EVER) genuine American made Damascus Spey blade. Each will come serialized on bolster, in Red Hill Cutlery box, with certificate of authenticity.