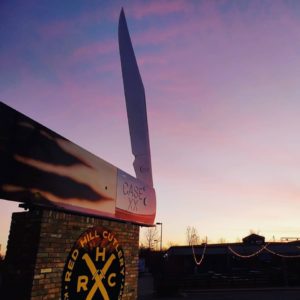 As seen on over over 50 news organizations, locally and nationally!

Red Hill Cutlery, in collaboration with W.R. Case & Sons Cutlery Company and the Radcliff/Fort Knox Tourism Commission, is attempting to break the Guinness World Record for World’s Largest Pocketknife. The attraction is located at Red Hill Cutlery’s new store in Radcliff, KY. Completed in Autumn of 2019, the World’s Largest Pocketknife weighs in at over 6,200 lbs of American steel, with a handle over 20 ft long and a blade that is over 17ft long. The knife was built by Modern Welding in Elizabethtown, KY, and was detailed by Ward Frahler of Glenn’s Auto Body shop in Vine Grove, KY. The knife is made to replicate a Case XX® Genuine Stag Barlow pattern and sits upon a reinforced steel and concrete bricked wall structure.The Basham family, owners of Red Hill Cutlery, are currently finalizing documentation with Guinness World Records on the global distinction of World’s Largest Pocketknife.

Red Hill Cutlery is a family owned and operated business, formed as an addition to Basham Lumber Company Inc. in 2004 by owners Lonnie and Kim Basham. Basham Lumber is a third generation family business founded in 1963 by Lonnie’s parents. Red Hill Cutlery features the largest knife showroom in Kentucky, and is one of the largest in the United States. In 2018, Radcliff was named the Knife Capital of Kentucky. Red Hill Cutlery is also home to the Kentucky Museum of American Pocketknives which displays over 100 years of knife history. The store and museum are managed by the Basham’s two sons, Jason and Josh. With the addition of Red Hill Cutlery’s new store and the monument of the World’s Largest Pocketknife, the city of Radcliff hopes to add even more enthusiasm from tourists who visit the already booming tourist hub. The new location, 92 Bourbon Trace, sits adjacent to several hotels and restaurants, conveniently located on the corner of Highway 313 and US 31W, less than 5 miles from the I-65 interstate. 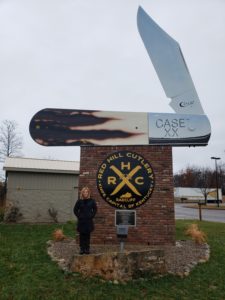